Find out why visitors love our tours!

Get a full refund if your tour is affected

Witness the Glory of Ancient Rome with your private guide as you enjoy skip-the-line access to see Rome’s most enduring monuments, the Colosseum, the Roman Forum, and Palatine Hill.

Come and hear about the scandals, intrigues, and passions that defined ancient Rome as you walk through its most famous archaeological sites:

The battleground of the Gladiators and one of the new seven wonders of the world. Your experienced tour guide will reveal the fascinating history, legends, and captivating characters behind what is perhaps Rome’s most iconic building.

The perfect location to understand the glory of ancient Rome.  the Forum was the center of the Empire; where the Senate met, where all the roads that to Rome met & indeed was the ‘umbilical’ of the Empire.  As you walk amongst the gorgeous ruins, your tour guide will give you a stunning introduction to ancient Rome and the incredible figures who, with shrewdness and strength, transformed a hilltop village into the world’s major global force.

The most famous of Rome’s seven hills, Palatine Hill is actually credited with being the site where Romulus founded what would become the Eternal City. Venture amongst the ancient ruins surrounded by beautiful towering pine trees as your guide explains why this became known as “the first nucleus of the Roman Empire”.

This tour is an action-packed three hours.

We will meet outside the Colosseum and proceed to enter without waiting in the long queues of tourists. Once safely inside we will enjoy discovering why it deserves its status as one of the new seven wonders of the world.

Following on from this, we will make our way over to the Roman Forum and Palatine Hill to walk along the ancient roads visualizing how the Romans lived.

Do I Need To Pay Extra For Skip The Queue Tickets?

In short, no! As officially licensed guides to Rome, we are able to INCLUDE fast track tickets to the Colosseum, Roman Forum, and Palatine Hill in the price of your guided tour.

*skip the line still must go through basic security on sites*

Why Book Your Ancient Rome Tour With Luxe?

Where Does This Guided Tour Start?

Our Colosseum, Roman Forum & Palatine Hill Tour meeting point is in front of the Colosseum metro entrance (ground floor NOT overlook) next to the green stationary kiosk. Once you confirm your tour, your guide will be in touch to provide any further directions as well as offer additional transport and transfers if required.

In front of the Colosseum metro entrance

Optional Add-Ons For This Tour

Step back in time to when Rome ruled the world as you discover the stories, legends, and fascinating historical characters behind the Roman Empire as you visit the most significant locations, incredible architecture, and stunning monuments of the era with your private guide on our extended Rome tour.

As officially licensed guides we can provide skip the line access tickets to all locations on this tour, so you have more time spent on-site with your tour guide and less time waiting in queues.

Ready to experience Rome like a true ancient Roman? With the Rome Extended Tour, an action-packed 4.5-hour tour, you will skip the line with your private guide as you visit the ancient center for civic and political life, the Roman Forum, and the Palatine Hill, which was the location of the first Roman settlement. Legend has it, this is where Romulus and Remus founded Rome!

Visit the House of Augustus

The House of Augustus, which was home to Rome’s first emperor and heir of Julius Caesar, is on top of the Palatine Hill and features spectacular wall paintings and floor mosaics which are considered to be among the best in the Roman world. This House is especially significant as the layout and architecture help us to understand the transformation of the Palatine Hill into the seat of imperial power, which marked the passage of Rome from Republic to Empire.

Explore the House of Livia

The House of Livia, which was home to Livia Drusilla, wife of and political advisor to Augustus. This house, also located on the Palatine Hill next to the House of Augustus, is the epitome of ancient refinement and elegance.

The third option is the Domus Transitoria*, the palace of the Roman emperor Nero. Nero, remembered today as the mad emperor reigned during the Great Fire of Rome which all but decimated Rome in 64AD. But did the Emperor start the fires himself? Your private guide will reveal what brought the mad emperor to power and discuss the engrossing theories and legends surrounding his reign.

This tour is perfect for kids & families!

These can’t miss sites are made all the more fascinating by the presence of immersive technologies, such as video projections, lightmapping, and narrative voice. When in Rome, see Rome as the ancient Romans did!

This add-on extends the tour by 1.5 hours

A Traditional Aperitivo at a Local Wine Bar

After the tour, get ready to relax and live like a true Italian. We will accompany you to our favorite local wine bar which is a stone’s throw from the Colosseum for a true Roman Aperitivo. A traditional Aperitivo would include a spritz/glass of wine/beer and a selection of Italian delicacies.

The Aperitivo is an Italian tradition starting back in the 18th century by the distiller Antonio Benedetto Carpano. The word ‘Aperitivo’ is derived from the Latin word ‘apertor’, or opener, and the Aperitivo is the precursor to a dinner or lunch designed to ‘open the stomach’, as the Italians would say. It’s also where Italians love to catch up!

Prendiamo un aperitivo – let’s get together for an aperitivo – is a catch cry amongst the locals & we can’t wait to take you along to experience this.

This tour is perfect for adventurers who want to learn about both the ancient and modern city of Rome in an interactive and hands-on way, and want to make the most out of their time in the Eternal City!

This add-on extends the tour by 30 minutes.

Meet Your Private Guide For This Tour

Amy will be your licensed guide in Rome. A history buff and local Roman citizen, Amy is the perfect guide to lead the way!

“Roman history – my passion! Let me share this with you on one of our most popular tours.”

Any questions about this Rome tour? Contact Amy below, she’s always happy to help.

Click on your travel dates below to check our availability 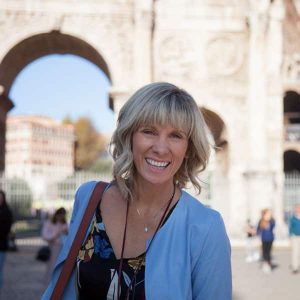 Our experts are always happy to help & can customize any tour to suit you & your group.

Ready To Start Planning Your Dream Private Tour In Italy?

Get A Custom Tour Quote
Amazing! There is no better way to see Rome. Amy's knowledge is second to none and I cannot recommend luxe travel enough. From the onset, everything was organized for us and it really was a truly amazing experience.
NikiUSA
Absolutely Amazing! I visited Rome in July 2020 and booked a Rome tour with Amy before Arriving. Amy was an excellent communicator before my tour making sure the itinerary matched up to my wishes.
JamieUSA
Amy gave us a most consummate Rome in a Day tour which we thoroughly enjoyed! She initially sought to establish our particular interests and then tailored her tour accordingly. The resources she used gave us an excellent sense of the Colosseum and the Forum in their former glory, compared with now.
CateUSA
We met the amazing Amy when we arrived in Rome, first with the “Strolling Rome’s Heart” tour. We had been in Rome for 24 hours and walked those same streets but what a difference having a guide like Amy and her team makes. Amy has so much to share with us, so much history and so many anecdotes and delivered in such an engaging way.
LeeUSA
I booked two private tours in Rome and Florence, and I sure am glad I used this company! Their guides speak excellent English and were incredibly knowledgeable. I also felt like I made two new friends while I was there! Look nowhere else if traveling to these cities.
TracyUSA
Previous
Next

Explore some of our other tours below, or contact our team to create your own bespoke private experience

Rome In A Day

Eat like a local on this crafted food-tasting culinary walking tour!

An exclusive tour of a fascinating ancient Roman city

Our tours are kept to small private groups to provide the best possible experience for our clients. As such we are able to customize our itineraries to suit your interests, needs, and requirements.

To discuss this tour or any changes you would like to make simply complete the form below.

Our Private Tours of Italy

Click on your travel dates below to check our availability

Any Questions? Ask our friendly team:

Click on your travel dates below to check our availability.

Any Questions? Ask our friendly team: